The Definitive Guide for treatment of PCOS ( Polycystic ovarian syndrome ) 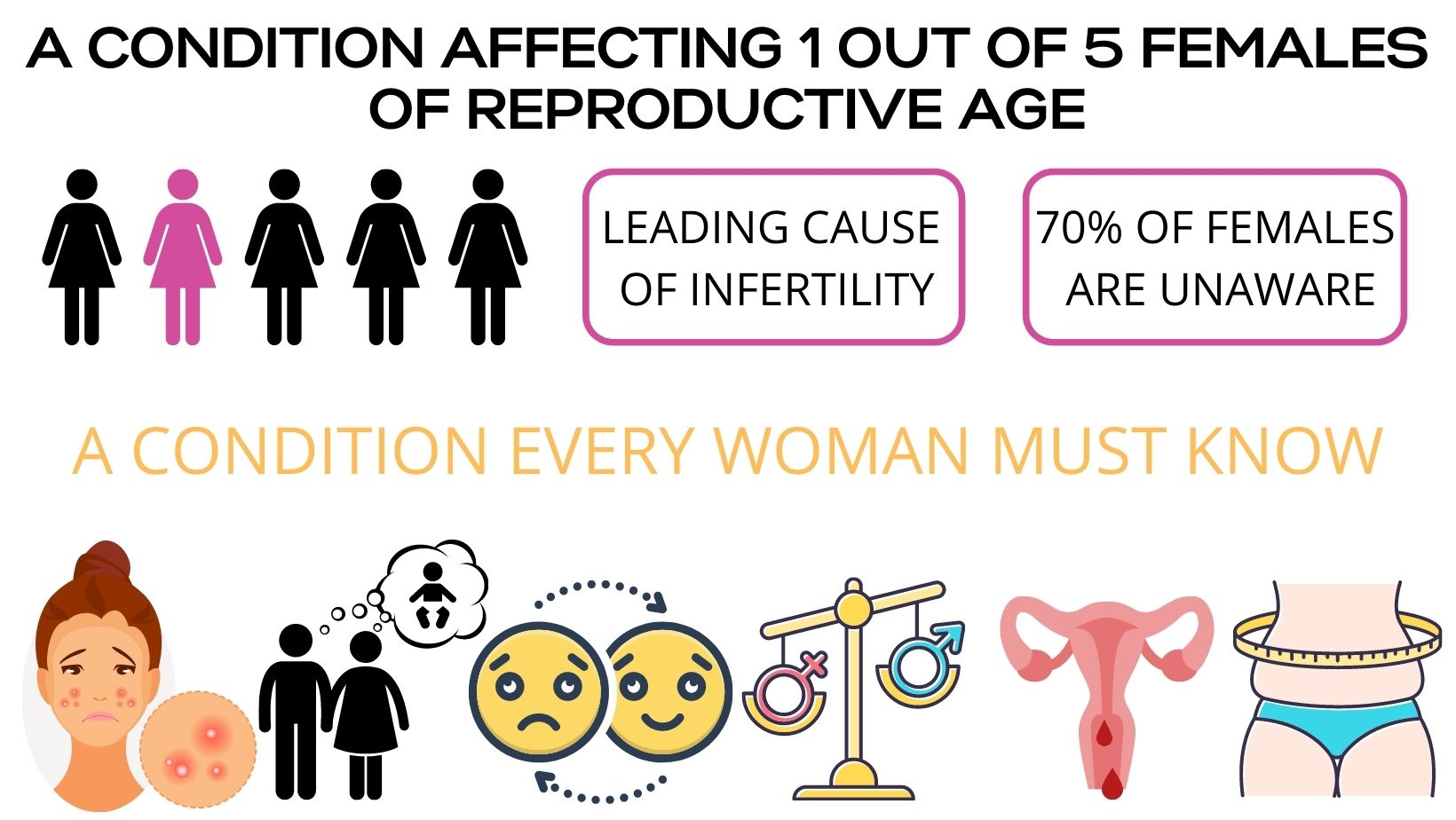 PCOS (Polycystic ovarian syndrome) is a condition that affects 5-10% of females under the age of 35. PCOS is arising as the most common endocrinological disorder and is the primary cause of infertility in females of childbearing age now.

1 out of 5 young females in India suffers from polycystic ovaries and 70% of them stay unaware of it. PCOS affects the female physically as well as psychologically creating a syndrome that hampers the day-to-day life of a female. If PCOS is left untreated it can cause a variety of complications.

The hormonal imbalance caused by increased male hormones in the female creates a cluster of symptoms affecting the female health massively.

PCOD/PCOS is a combination of symptoms produced by an imbalance in the hormones (fall in female hormones and hike in male hormones) in the female. The imbalance of hormones causes irregularity in periods and sometimes even amenorrhoea (absence of menses). Further, there is no release of an egg (due to an increase in levels of male hormone/ androgens) and cysts are formed on the periphery of the ovaries. Due to high male hormones, there is thinning of hair on the scalp and hairiness on other body parts. 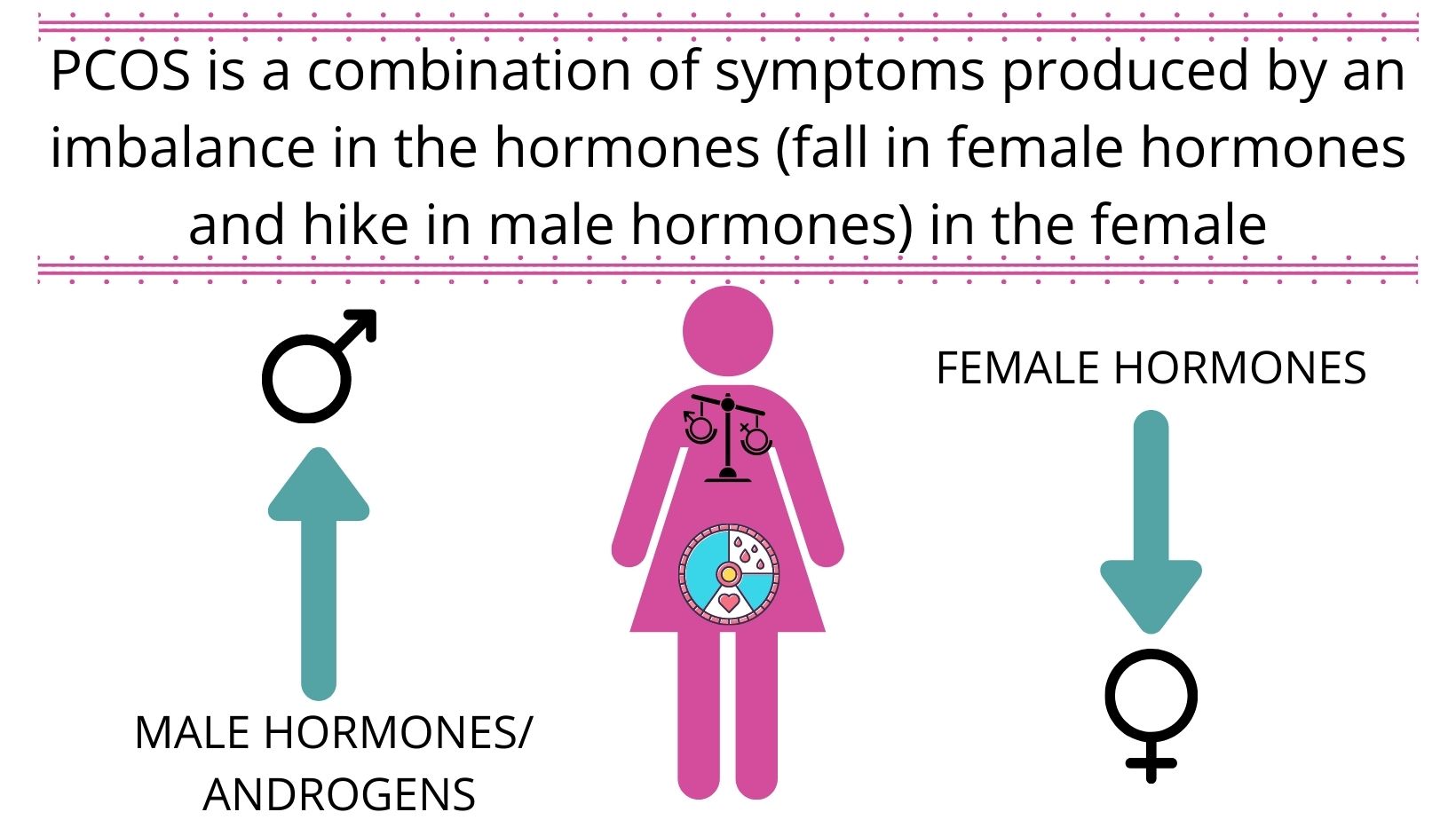 The patient usually presents with the issue with her menses/ periods or inability to conceive as the menstrual cycles are irregular and anovulatory which means there is no egg released by the ovaries for fertilization causing infertility.

Normally ovaries produce female sex hormones which help in the release of eggs and maintain normal functions. But ovaries also produce small amounts of male hormones also known as androgens which go out of balance in PCOD.

This imbalance would suppress ovulation, would produce acne, and increase hair growth on the face and body. This imbalance stops the maturation of eggs and takes the form of cysts on the periphery of ovaries thus called polycystic ovaries.

If the condition is not treated insulin-resistant diabetes can occur with high cholesterol and weight gain.

WHAT ARE THE TYPES OF PCOS?

There are 4 types of PCOS seen:

This surge in insulin levels causes more production of androgens (male hormones). More than normal levels of male hormones in a female body interferes with all the female functions (ovulation, menses). 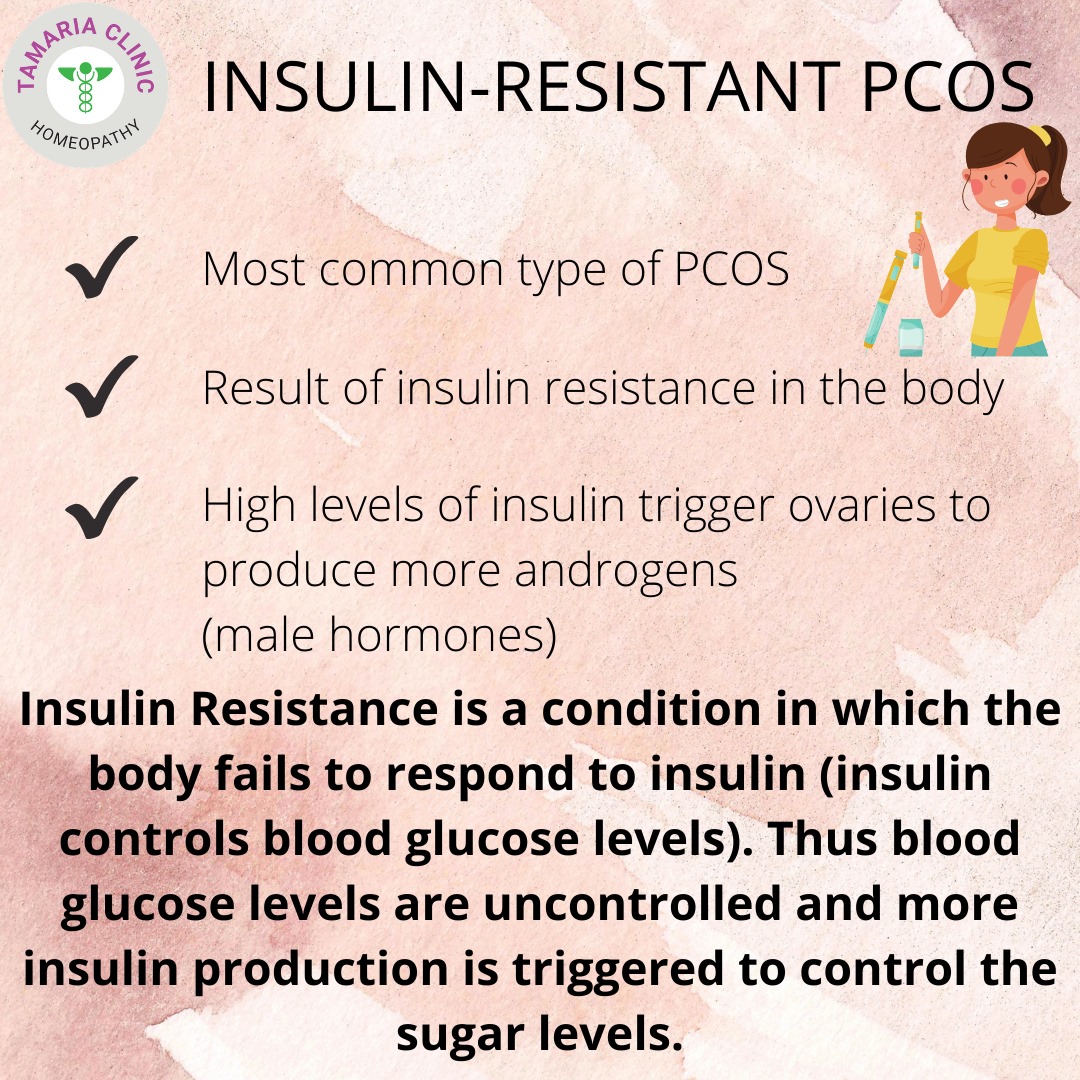 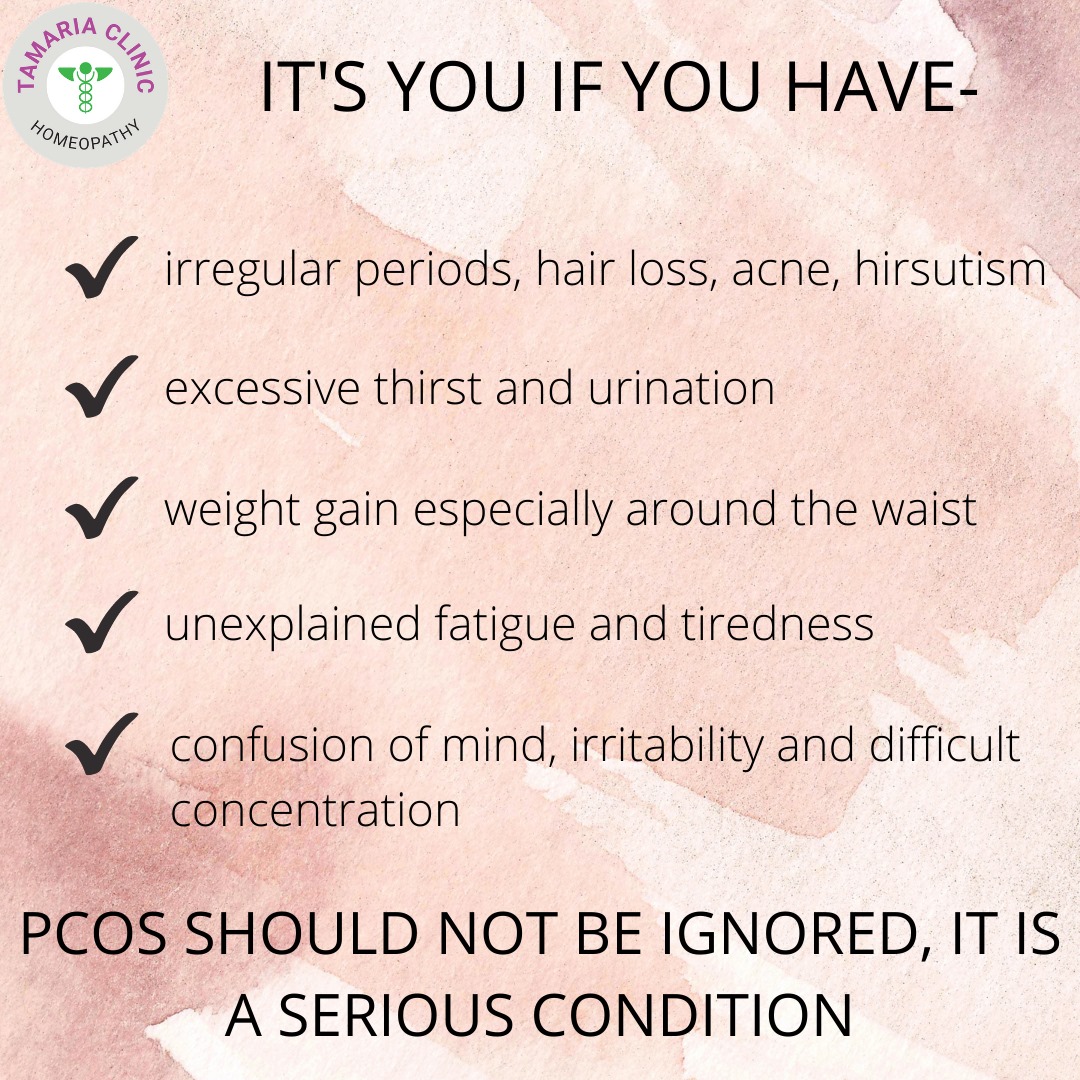 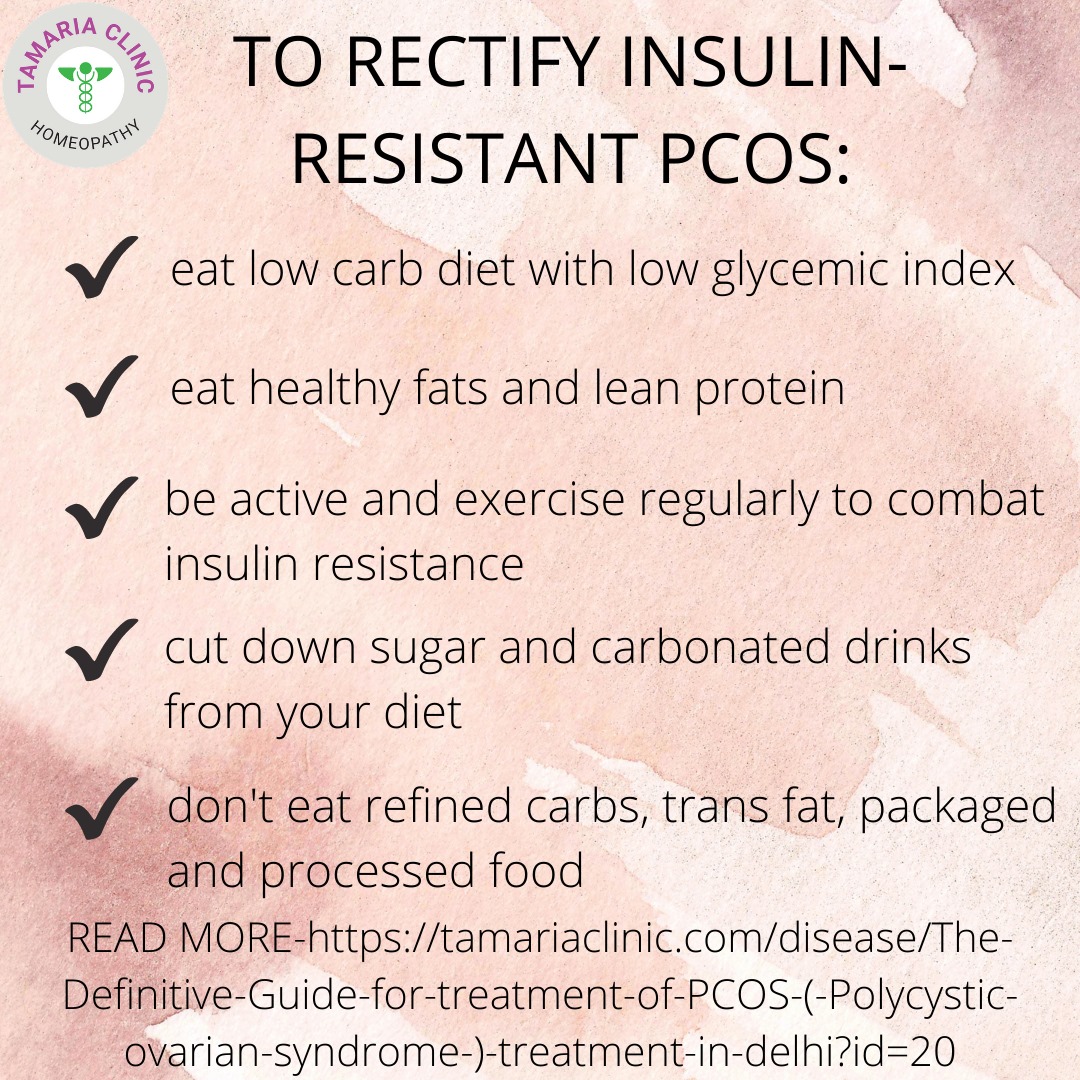 The symptoms usually disappear within few months if supported with a good lifestyle, diet, and exercise. 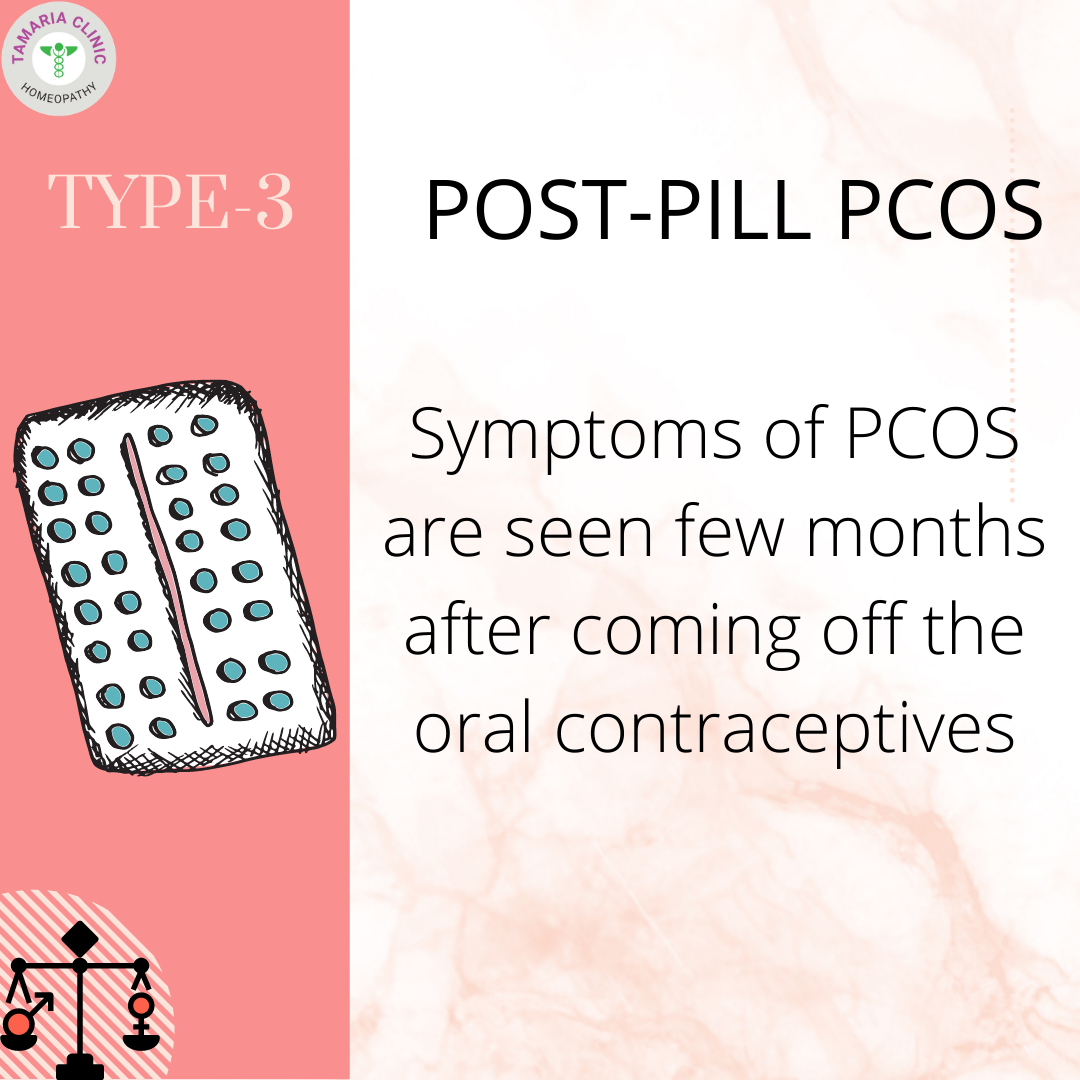 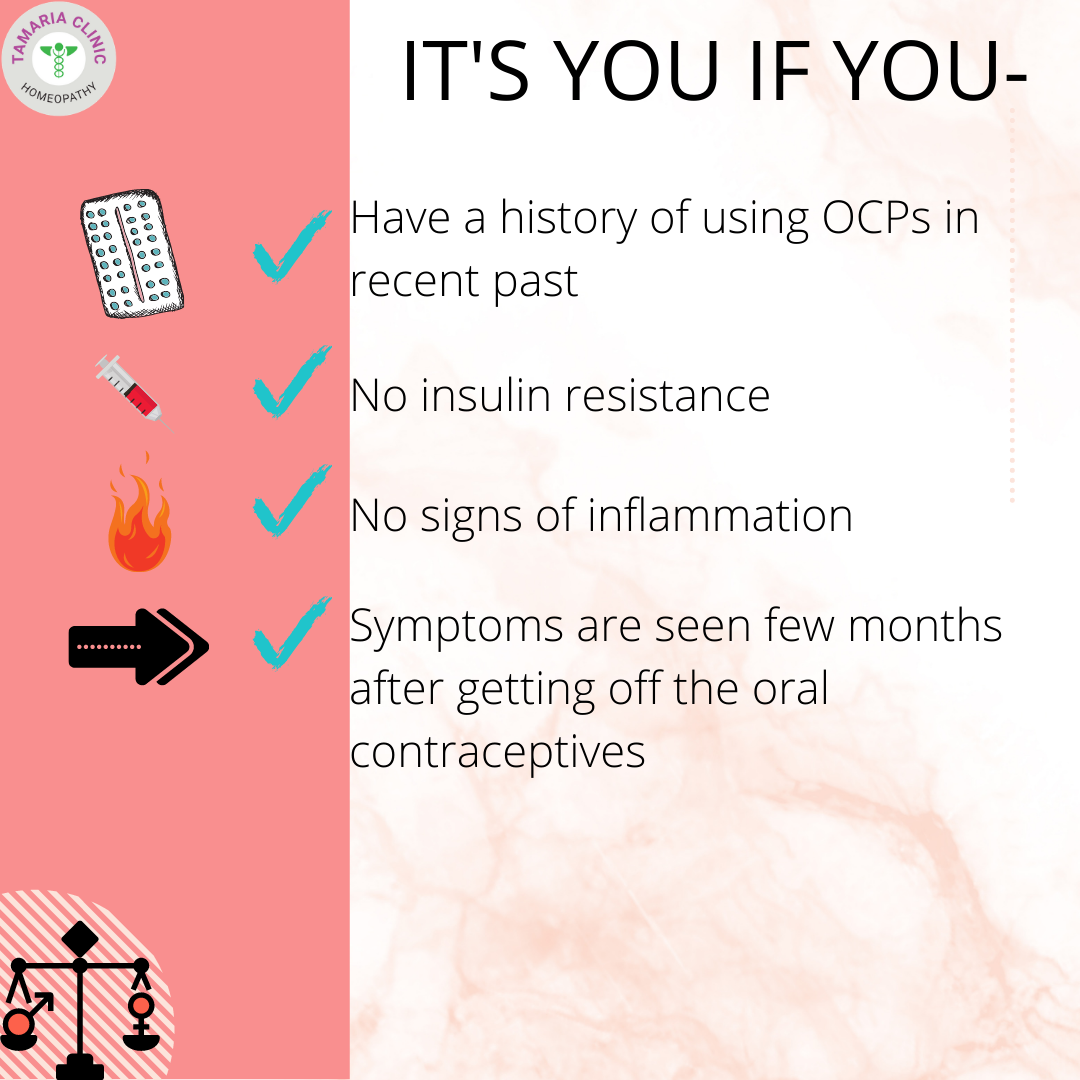 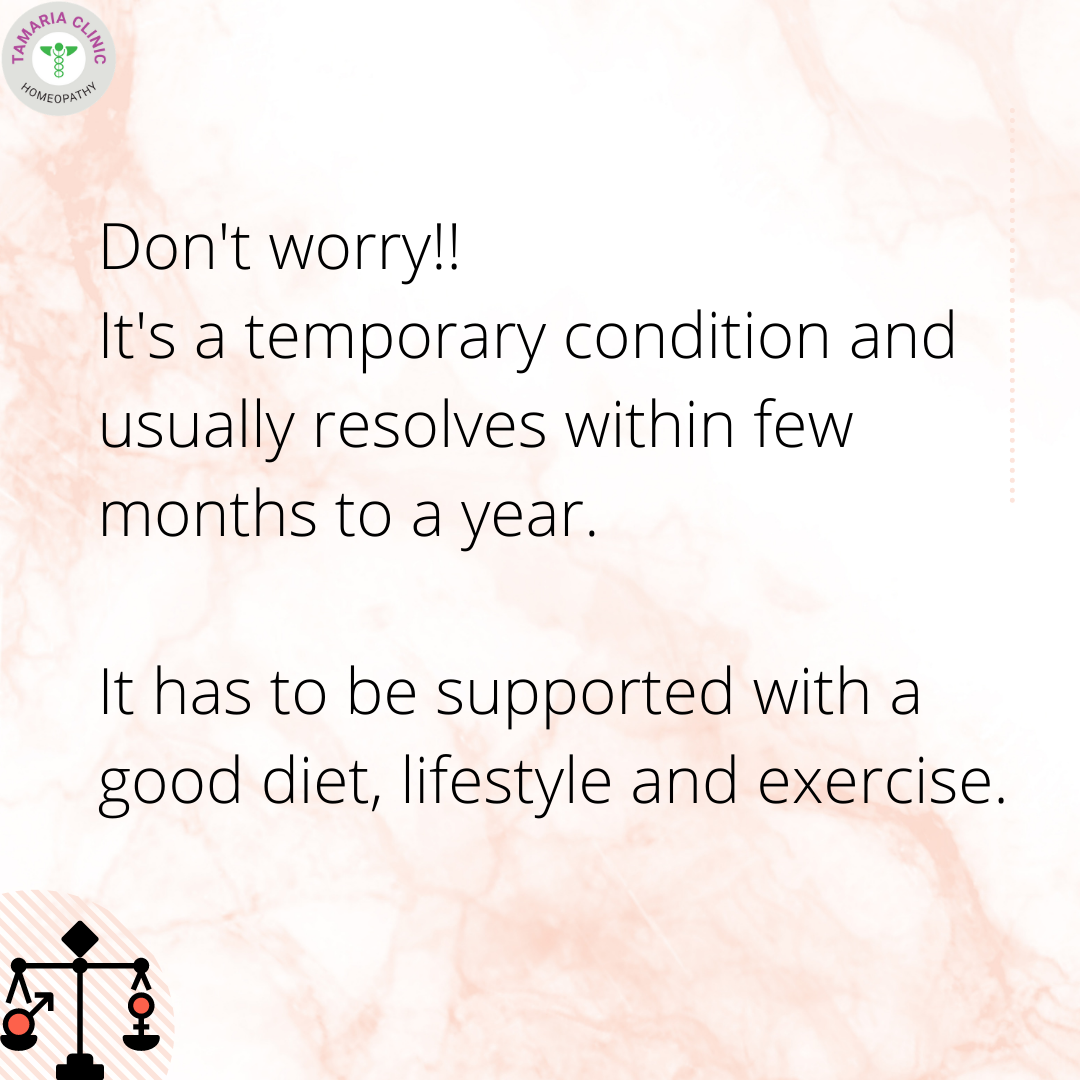 In inflammatory PCOS there are other associated symptoms with inflammation like fatigue that is not relieved by sleep, joint pain, headaches, disturbed digestion, skin rashes, etc. 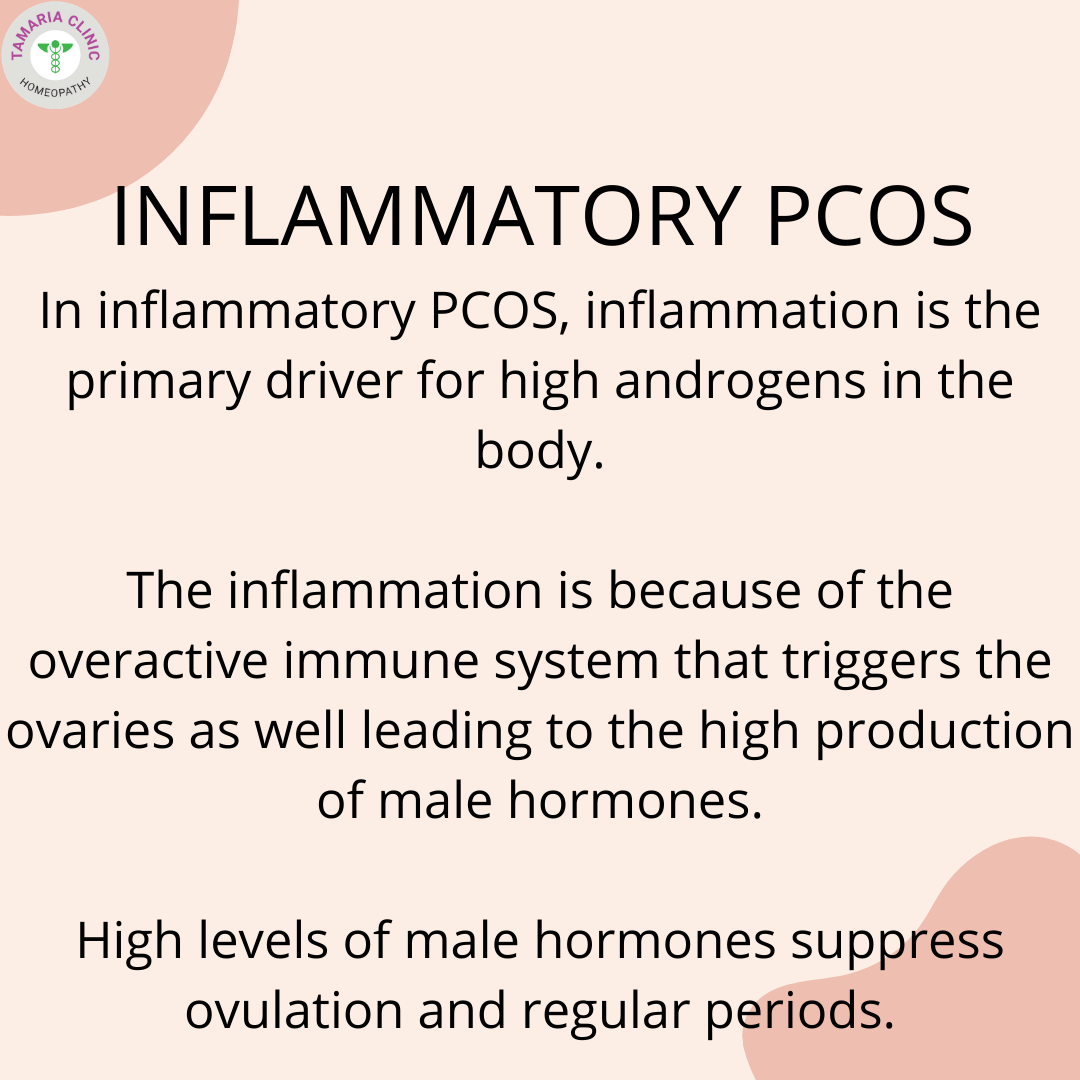 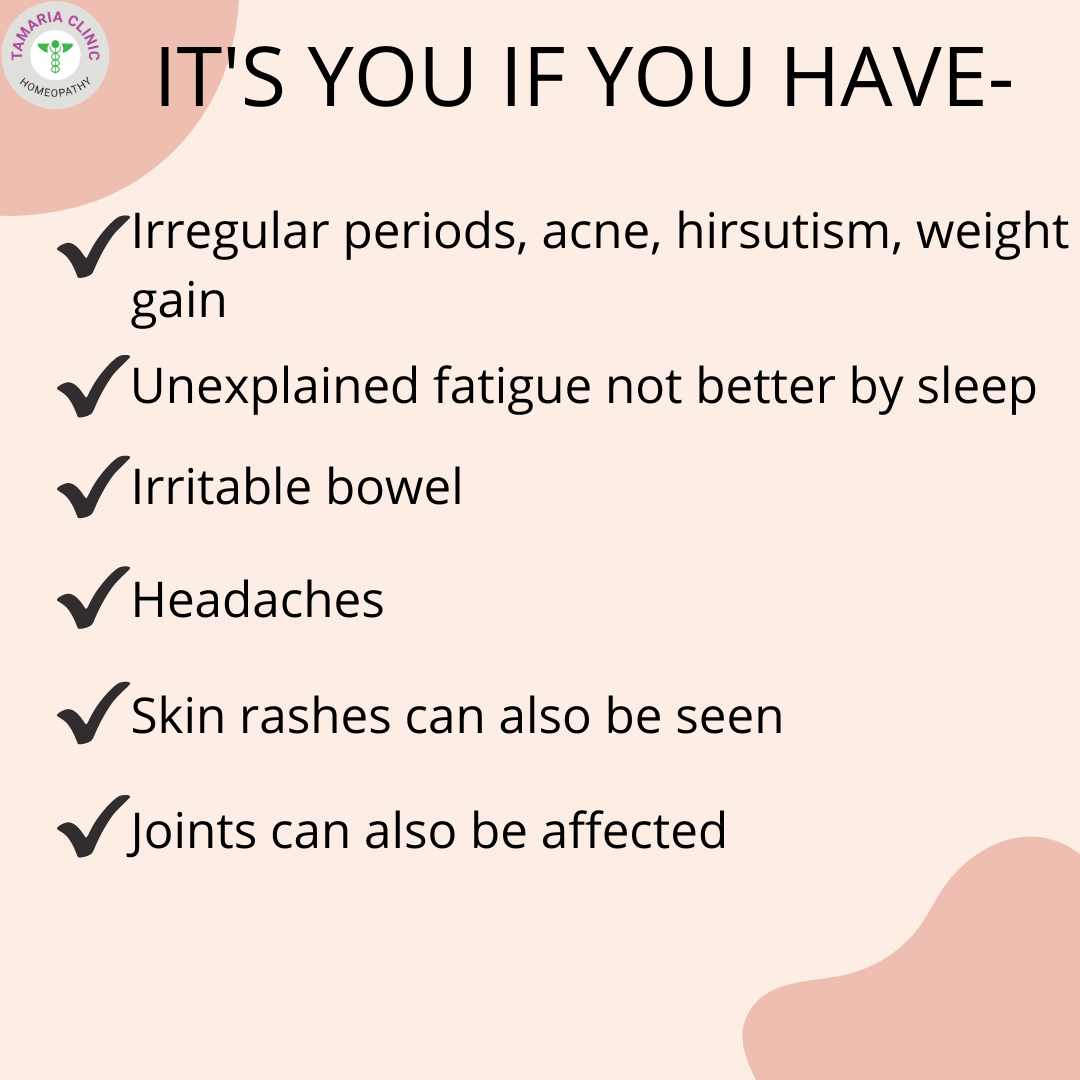 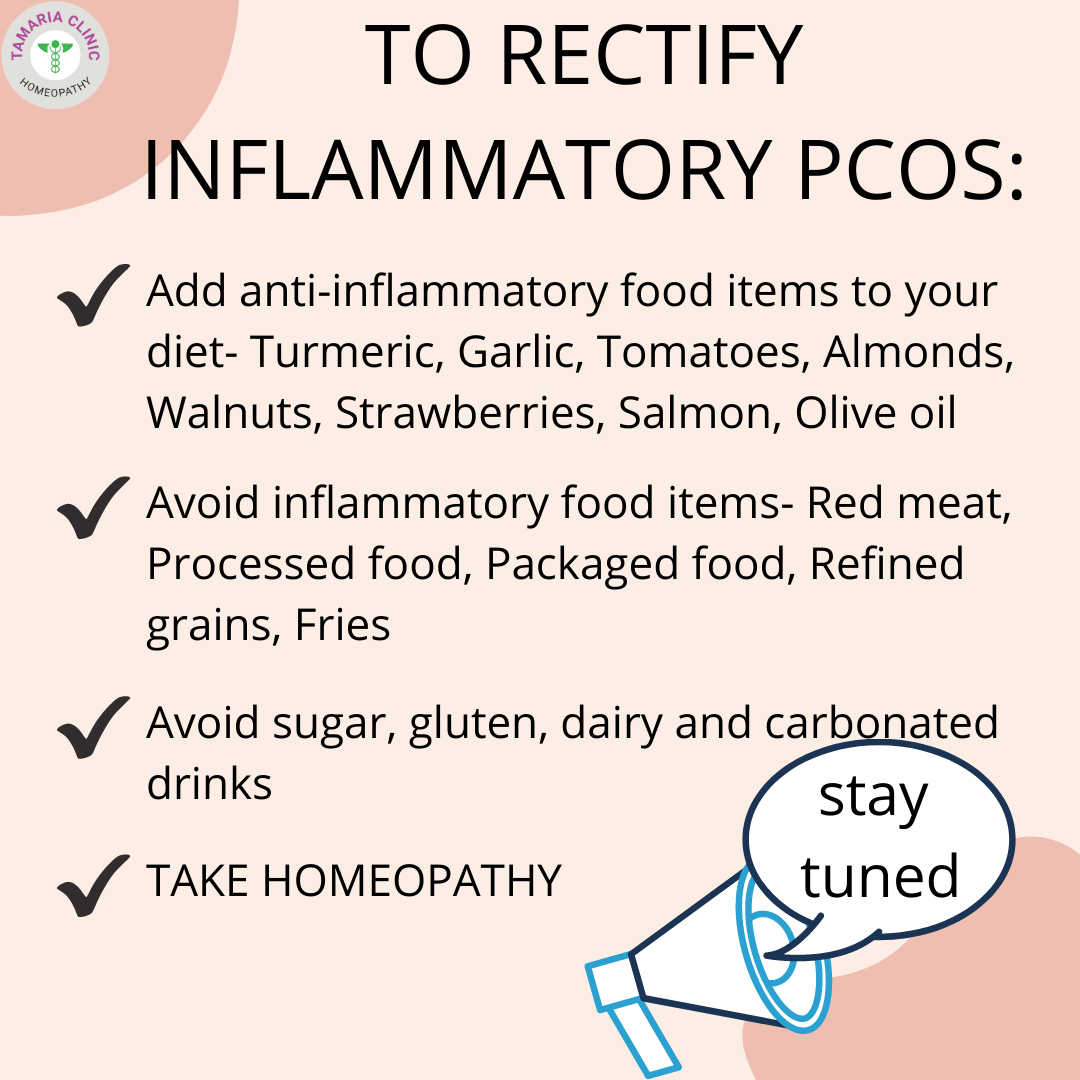 In this type, the female is either under a lot of stress or she is responding abnormally to stress. In such cases, there are high levels of DHEAS- an androgen produced by adrenal glands while levels of androgens produced by ovaries are normal.

The patient should focus more on good sleep, meditation, and removing factors that trigger stress in her. 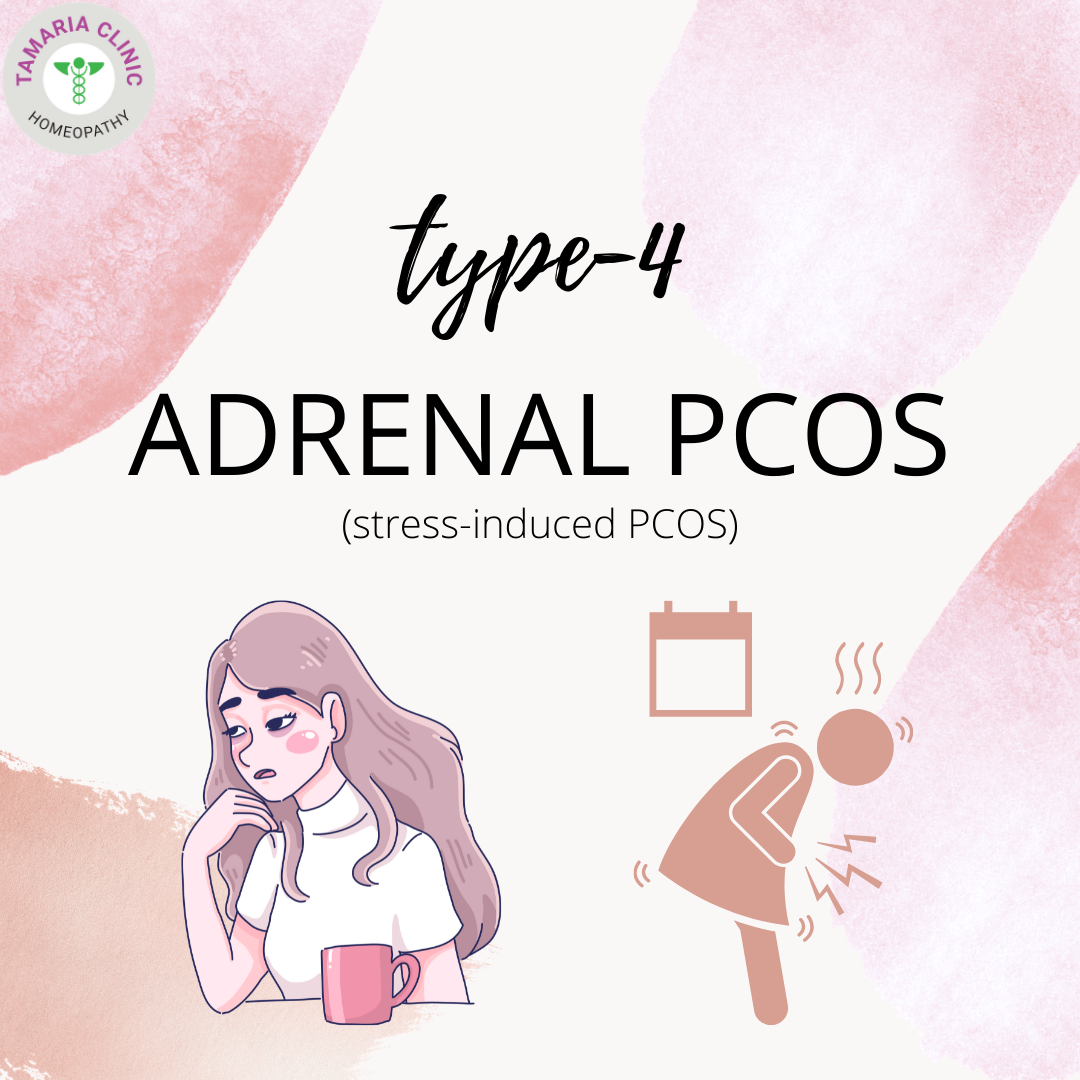 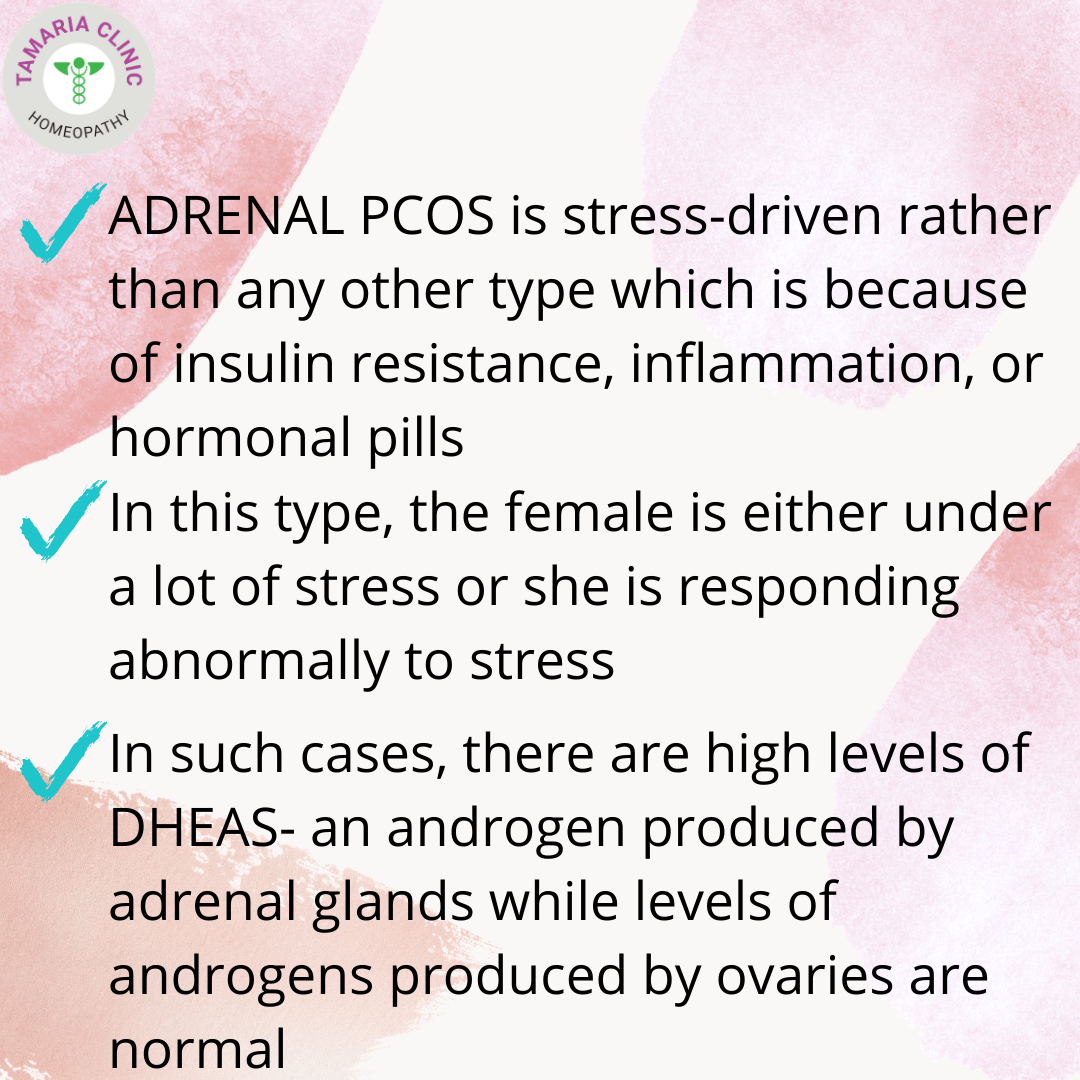 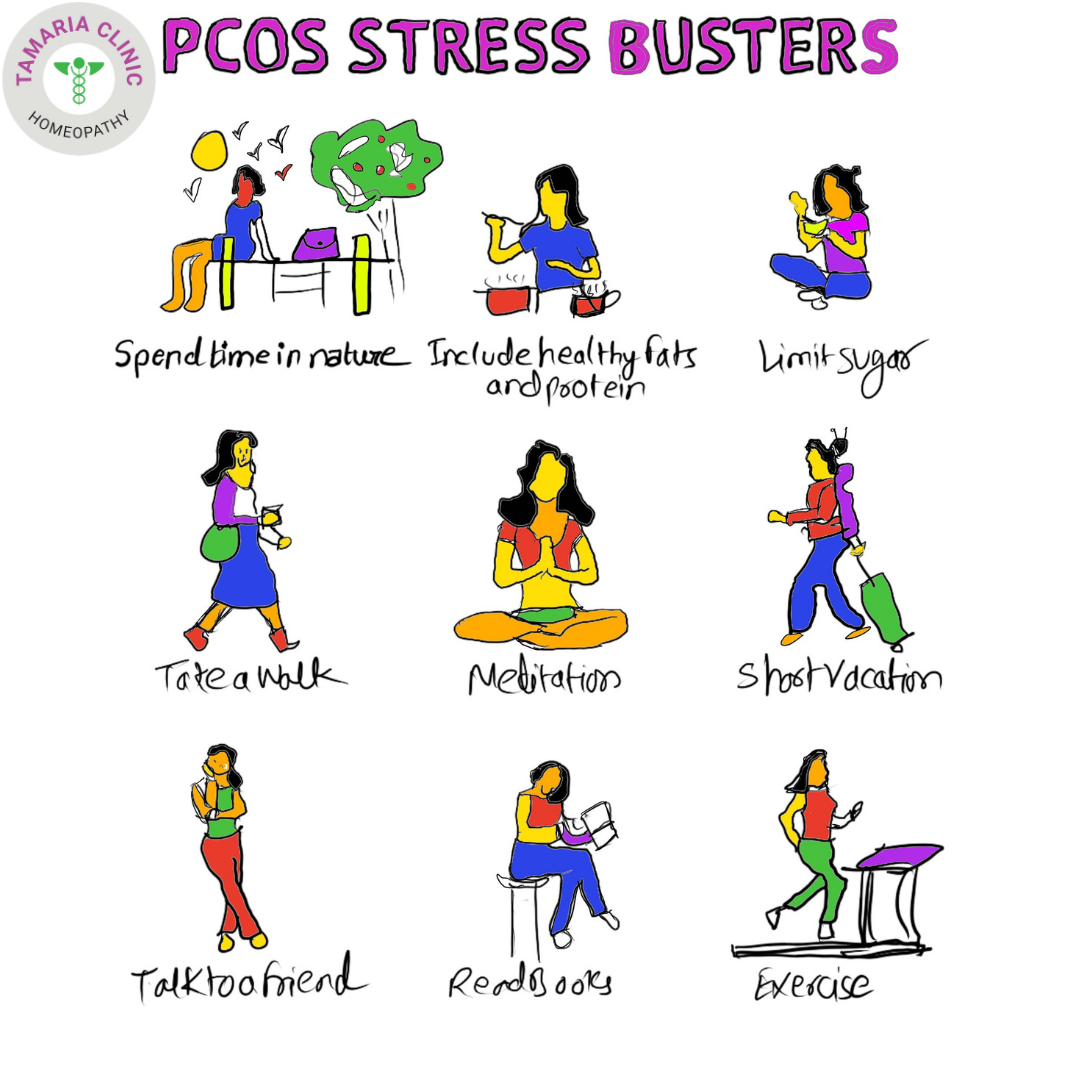 The exact cause of PCOS is not known but PCOS runs in families thus genetic relation can be seen. Apart from this, there is insulin resistance that causes increased androgens and inflammatory factors as well that are responsible for triggering PCOS.

WHAT ARE THE SYMPTOMS OF PCOS?

Many females are not so vigilant about the condition and end up ignoring the symptoms for long until they have gained a lot of weight or face difficulty getting pregnant. Common symptoms of PCOS include: 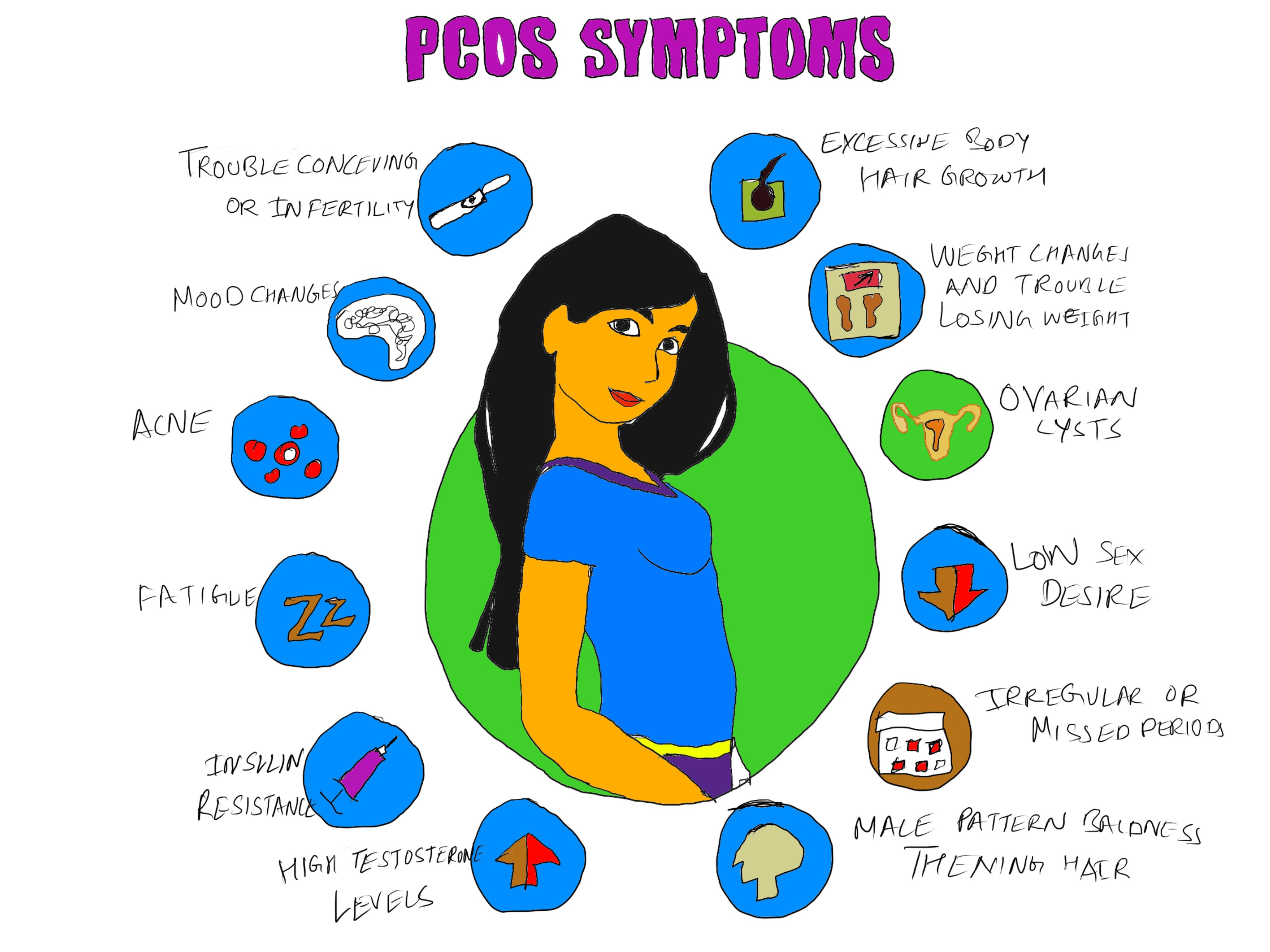 HOW PCOS AFFECTS THE FEMALE BODY?

Higher than normal levels of androgens in the body of a female can affect her in many ways: 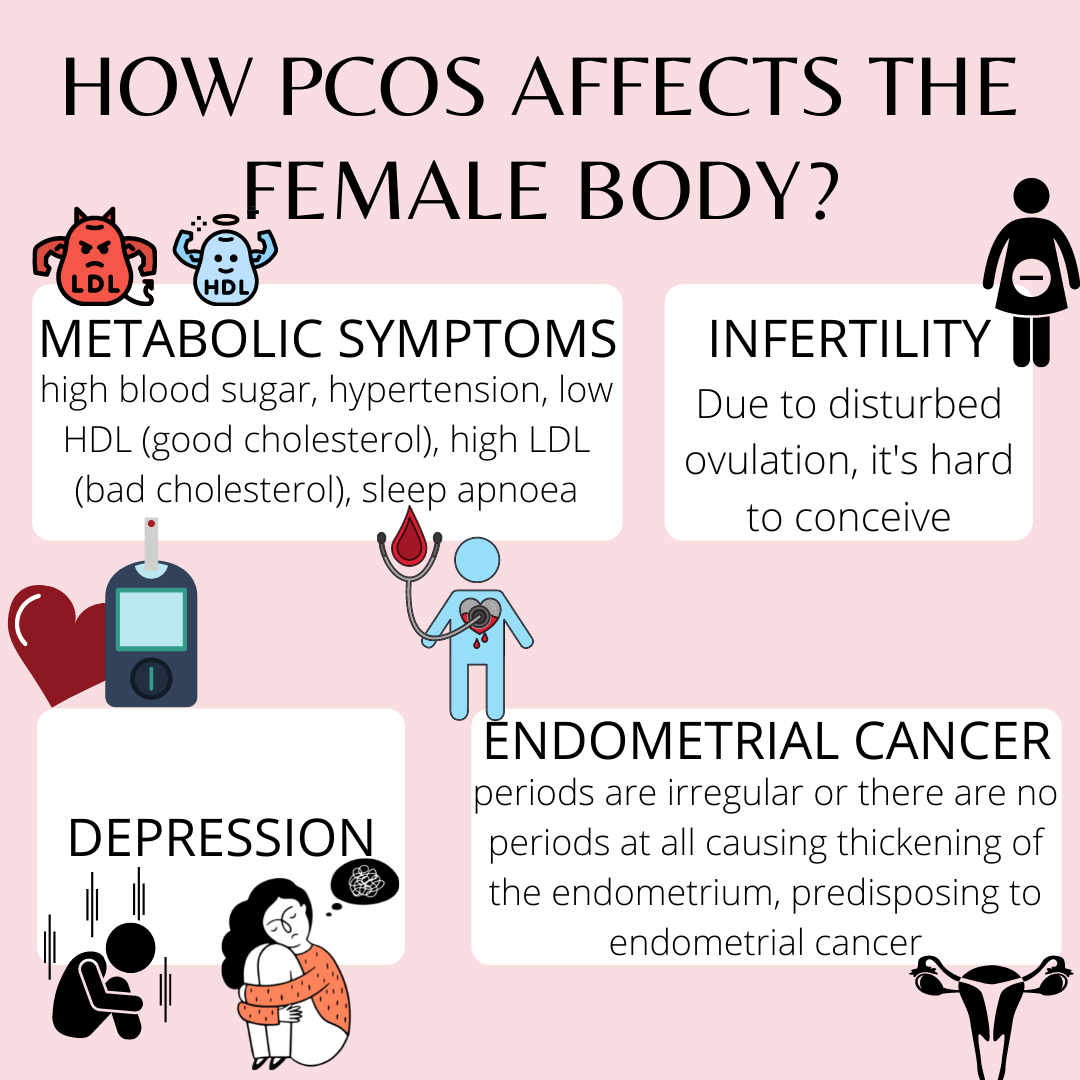 HOW TO DIAGNOSE PCOS?

The diagnostic criteria for PCOS include at least 2 of the 3 criteria:

To diagnose a case of PCOS the presenting symptoms of the patients like disturbed menses, acne, facial hair, weight gain, etc; following investigations can be done:

WHEN ONE SHOULD SEEK TREATMENT?

For a female, the first criteria sought to judge her health is her menstrual cycle. Any sort of abnormality with the menses should be consulted with a doctor.

See the doctor if: 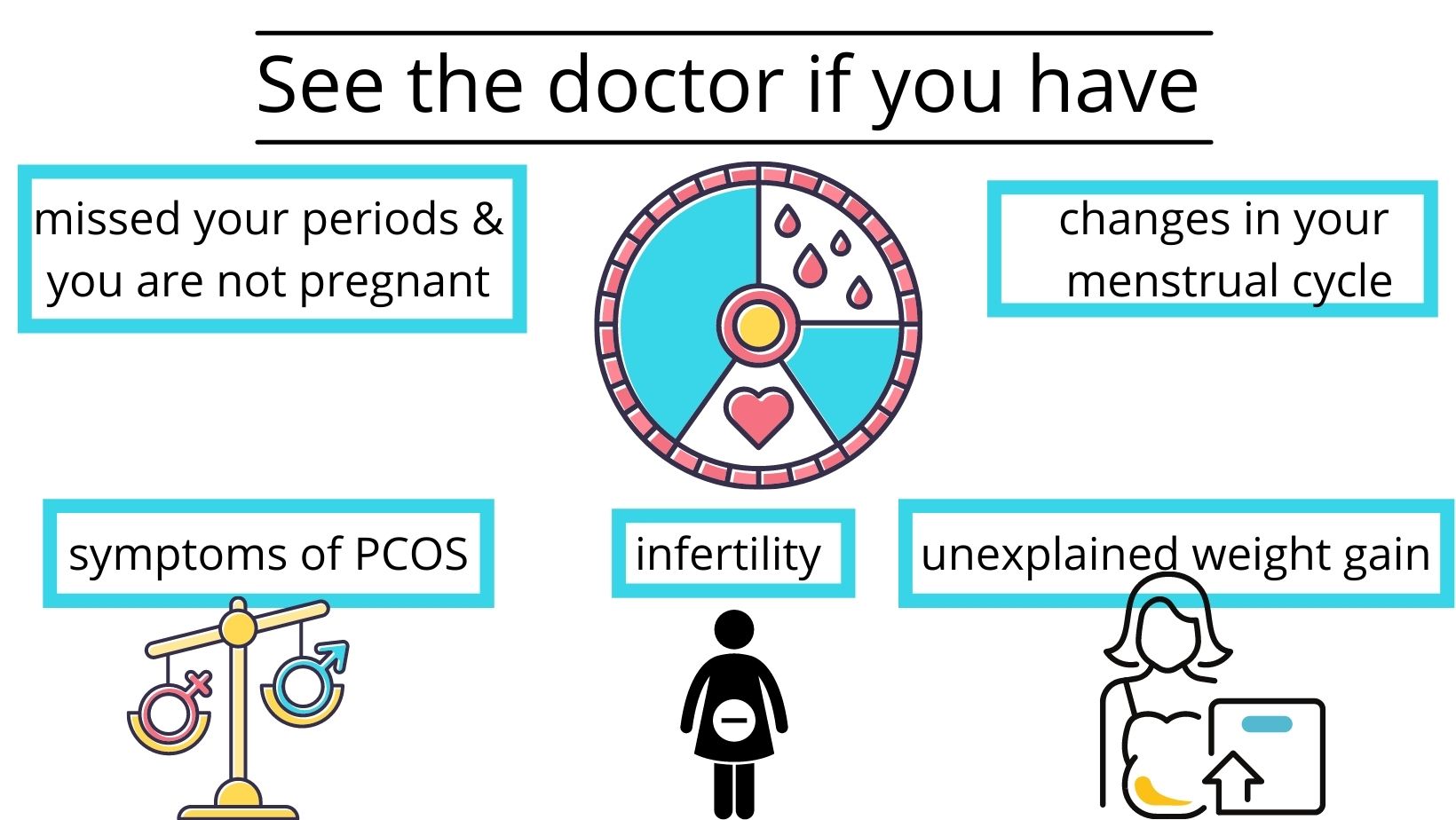 WHAT ARE THE COMMON MEDICAL TREATMENTS AVAILABLE IN ALLOPATHY FOR PCOS?

While looking at the treatment for PCOS, in allopathy the main focus is on keeping the cycles on time and assuring monthly shedding of the endometrium by administering progestin daily.

BIRTH CONTROL PILLS are used for controlling the symptoms of PCOS. They tend to regulate the cycles, regulate ovulation and try to control the other symptoms as well like facial hair.

METFORMIN is given to deal with high glucose levels.

But all these medications are not helpful to rectify PCOS at all as there is just temporary regularization of menstrual cycles under the influence of hormonal pills but the root cause remains the same. Once the female stops taking those pills symptoms are back.

There are about a thousand medicines in homeopathy that can be used for the treatment of PCOS. In homeopathy, the approach to the disease is quite different. The medicine sought for every patient is based on individualization and a holistic approach is applied to treat a patient.

Homeopathy focuses on the root cause of an ailment and works towards the natural rectification of hormonal imbalance created in the body. Homeopathy seeks for timely ovulation and helps in the treatment of associated symptoms as well.

Below are few homeopathic remedies for PCOS:

Pulsatilla: Pulsatilla is one of the first remedies thought of, in affection, peculiar to women. Its essentially feminine disposition of gentleness timidity, mildness, docility excellent thing in a woman is most characteristic of the drug; even tearfulness, another feminine attribute, strongly points to Pulsatilla. Then, we have fickleness, indecision, and changeableness, which are certainly characteristic of Pulsatilla and of some women. Dark menses which are delayed and accompanied by this severe menstrual colic and the characteristic temperament will be the indications. The menses of Pulsatilla, besides being scanty, are quite apt to appear too late.

Caulophyllum: This is a valuable remedy in treating irregular periods, difficulty becoming pregnant or slow childbirth due to weak muscle tone of the uterus. The patient feels menstrual discomfort with heavy bleeding and drawing pains in the pelvic region, thighs, and legs. These patients complain of habitual abortion due to uterine debility.

Cimicifuga Racemosa: This remedy is intended for irregular and painful menses, with shooting pains that go down the hips and thighs, or cramps similar to labor pains that are felt in the pelvic area. Women become restless, fearful, and depressed before a menstrual period. These women are strong, talkative, depressed, they try to injure themselves, and have dreams of impending evil, with fear of riding in a closed carriage.

Lachesis: This remedy is suggested to women who are passionate, with a tremendous need for an outlet, both physically and mentally. The menstrual flow is irregular, heavy and brings relief of tension. These patients are very outspoken with strong feelings of suspicion or jealousy. They have an intolerance of restrictive clothing around the waist or neck.

Lycopodium: This is an outstanding remedy for delayed menses that follows a heavy flow lasting more days. These patients have a ravenous appetite with a strong craving for sweets. They complain of abdominal bloating and flatulence, and always have a worried look with a lack of confidence, though they may be bossy with their family.

Murex Purpurea: This remedy works amazingly in Irregular Menstruation with large clots and a feeling of protrusion. These patients feel very weak, are very conscious of a womb, and feel as if something is pressing on a sore spot in the pelvis. This sore feeling is worse on sitting, hence the patient always sits with legs tightly crossed. The least contact of parts causes violent sexual excitement in these women.

Secale cornutum: This is a useful remedy for Irregular menses in thin, shriveled-skinned women. Their whole body is pervaded by a sense of great heat and they have burning pains in the uterus. Menses is irregular, dark and at times, there is continuous oozing of watery blood until the next period. Their pregnancy concludes in a threatened abortion in the third month

Sepia: This remedy is best suited to women who feel weary and dragged-out, and are indifferent to their own family members. She feels taken for granted and overworked, becomes irritable and sarcastic if demands are made. Menses is delayed with a feeling that the pelvic floor is weak, or as if the uterus is sagging.

BUT HOMEOPATHIC MEDICINES SHOULD NEVER BE CONSUMED WITHOUT CONSULTING A QUALIFIED HOMEOPATH.

WHY HOMEOPATHY IS THE BEST OPTION FOR THE TREATMENT OF PCOS? 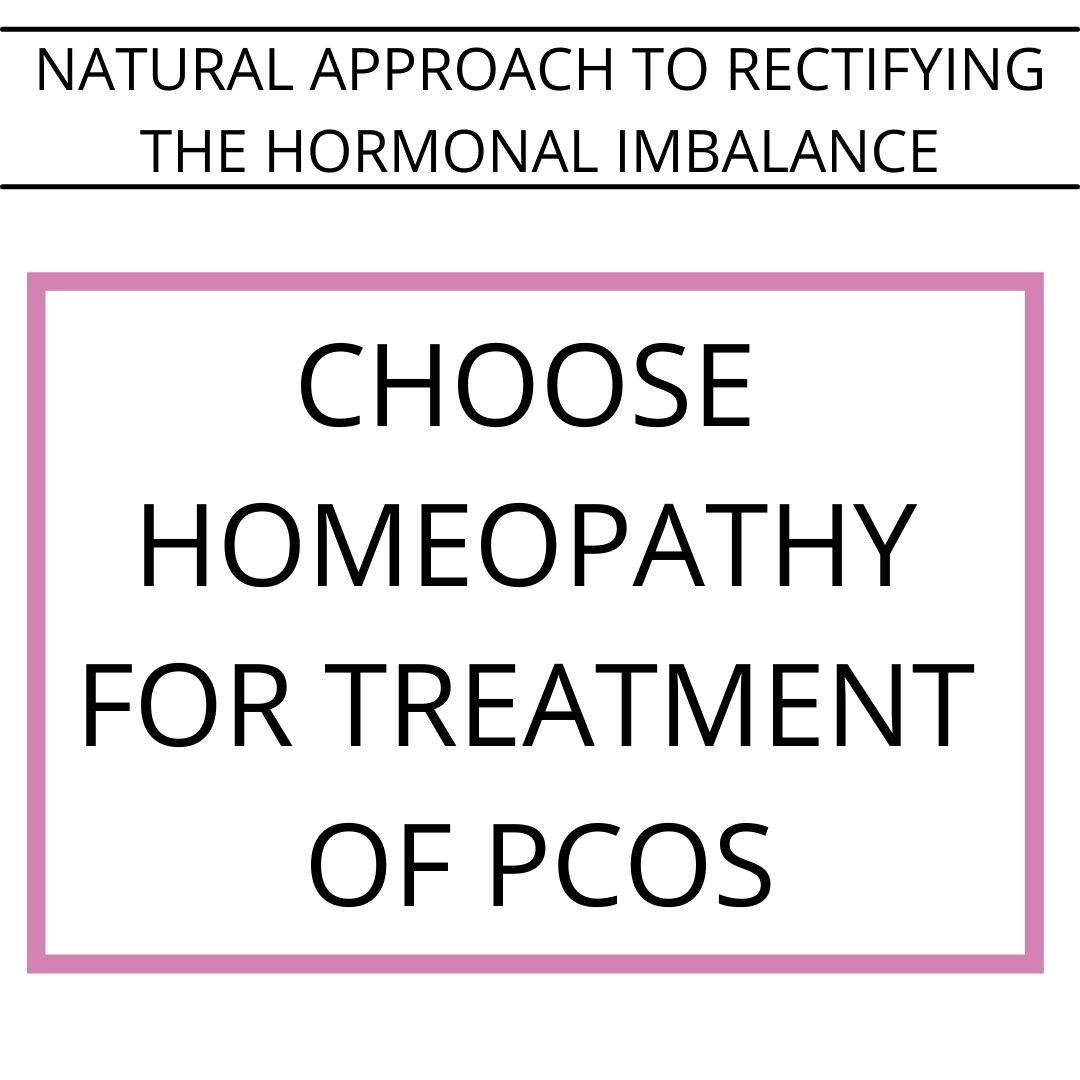 Homeopathy is very effective in the treatment of PCOS as it helps in getting regular ovulatory menstrual cycles without any hormone being given.

It helps to get rid of facial hair and treats infertility as well.

HOMEOPATHY IS A PROVEN METHOD FOR THE TREATMENT OF PCOS AS THERE ARE NO ARTIFICIAL  HORMONES ADMINISTERED AS THEY HAVE SIDE EFFECTS OF THEIR OWN. THERE IS A NATURAL APPROACH TO RECTIFYING THE HORMONAL IMBALANCE. 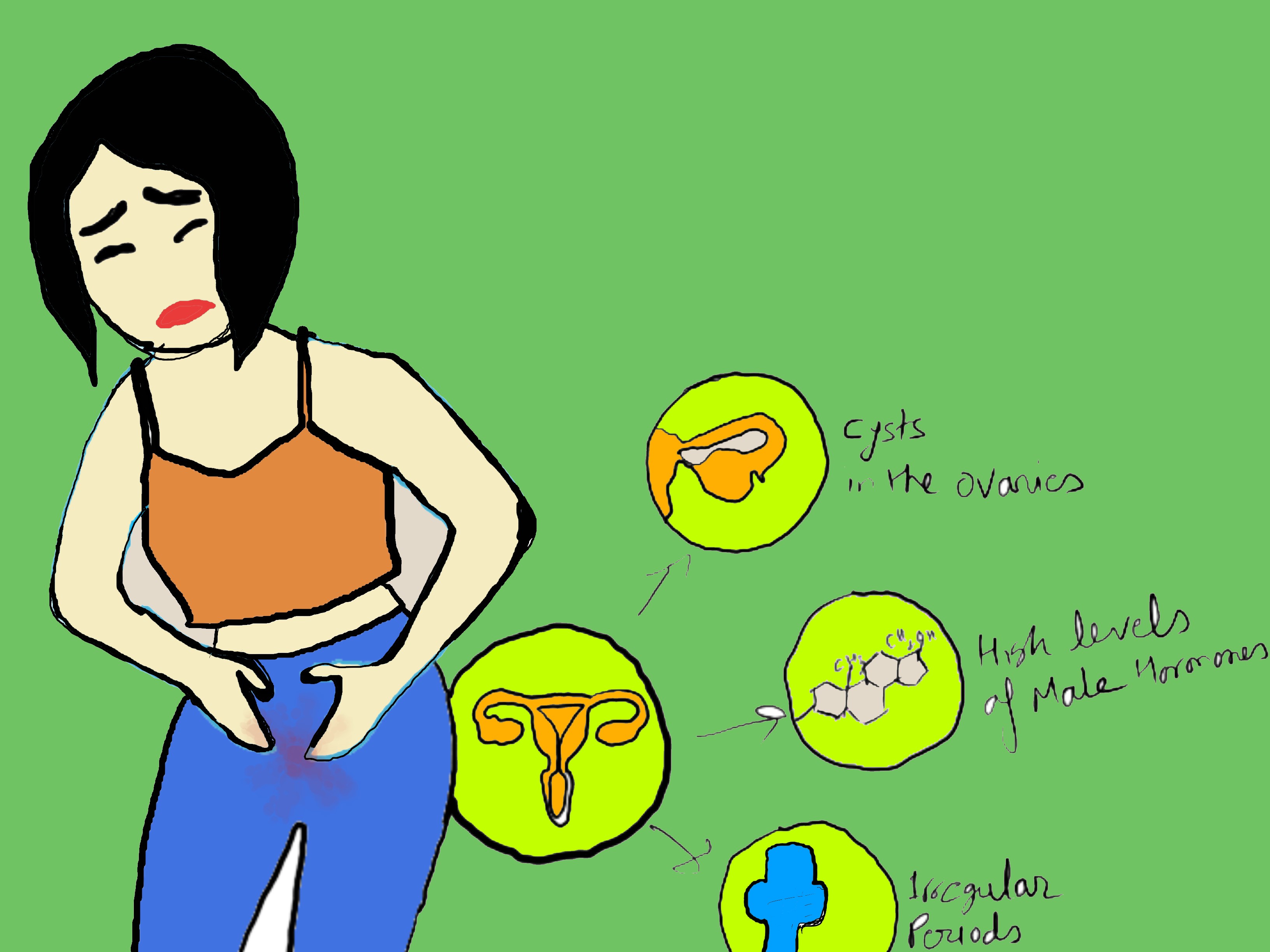 12 TIPS TO MANAGE PCOS FOR WOMEN AND YOUNG ADULT FEMALE 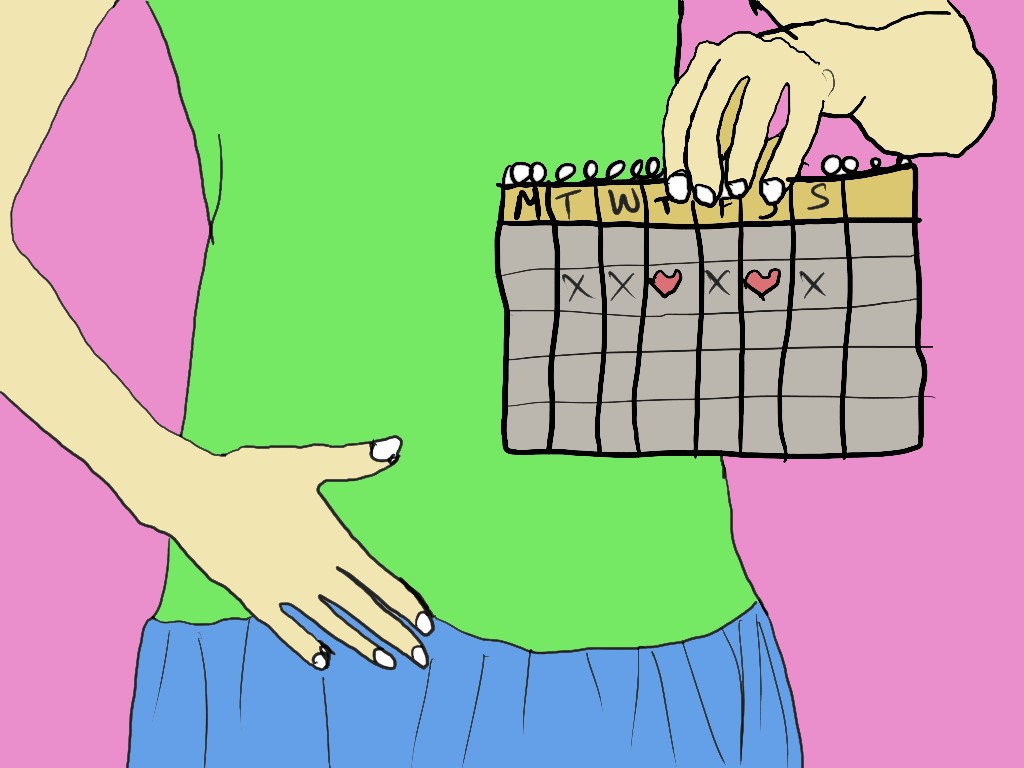 Here are few homeopathic medicines that can help with irregular periods. Always consult a registered physician and don't self medicate 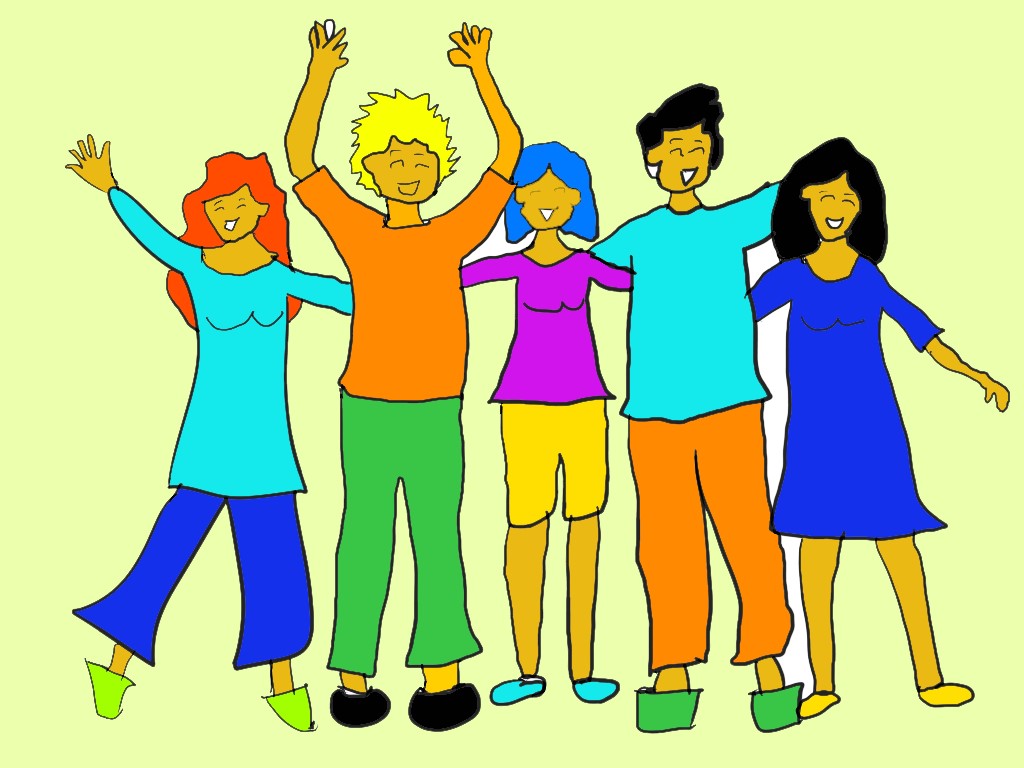 A health-y approach to adolescence 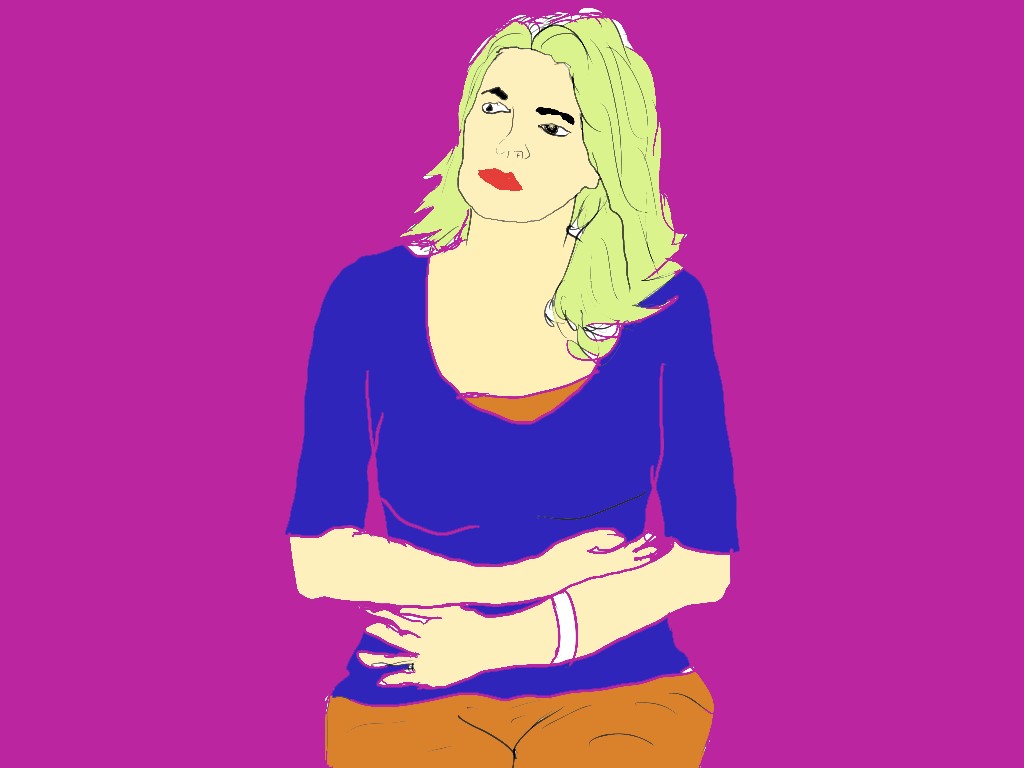 HOMEOPATHIC MEDICINES FOR CRAMPS DURING MENSES